Judge Condon offers free workshops to the public on the estate administration process on the first Monday of each month. He also assisted the family members of the Charleston Nine and the Emmanuel Nine with the probate process.

Judge Condon has been a faculty member and frequent speaker for the National Judicial College, the National Association of Drug Court Professionals, the National Drug Court Institute, the National Business Institute, the Charleston School of Law, West Virginia University's Master of Legal Studies online program, and for numerous civic and charitable organizations. Judge Condon serves on the planning committee for the Medical University of South Carolina Attorneys and Judges Substance Abuse Annual Seminar. Judge Condon, the Charleston County Probate Court, and the Mills House Hotel have partnered on an annual probate seminar for over 20 years to raise funds for portraits and furnishings for the courthouse and funds for housing, bus passes and related needs for citizens in the problem solving courts.

Before his election, Judge Condon was a shareholder in the law firm of Rosen, Rosen & Hagood, P.A., in Charleston where he practiced probate and business law. Judge Condon earned his law degree from the University of South Carolina School of Law. Judge Condon is a Certified Public Accountant and worked for McKnight Frampton and Price Waterhouse for three years before going to law school. He attended the College of Charleston and received his B.S. degree in accounting, magna cum laude, from Clemson University. Judge Condon was also admitted to the MBA Program of the Wharton School of the University of Pennsylvania but chose to work for Price Waterhouse followed by law school. He is a graduate of Bishop England High School.

Judge Condon grew up in Charleston as the seventh of ten children born to the late Harriet Molony Condon and the late J. Joseph Condon. He and his wife, Michelle Mensore Condon, an attorney originally from New Martinsville, West Virginia, have a teenage son. They are members of the Cathedral of St. John the Baptist in Charleston. 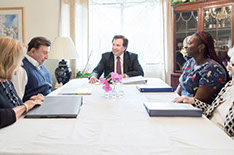 Contributions can be made by check payable to:

Committee for Condon for Probate Judge

Contributions can also be made securely online by clicking the DONATE button below.

PAID FOR BY THE COMMITTEE FOR CONDON FOR PROBATE JUDGE    |    info@irvcondon.com